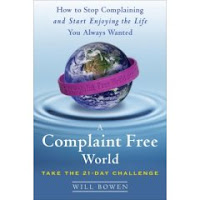 Why do People Complain?

The delightful success of the idea to stop complaining and begin appreciating is awesome. The “Purple Bracelets” that symbolize the movement are showing up everywhere. Rev. Will Bowen, who initiated the exercise at the Christ Church Unity in Kansas City, Missouri, has summarized some of the main reasons people complain:

To Get Attention: The primary need people have is to connect with others. A person may complain to a stranger about the weather or a local sports team as a means of starting a conversation.

To Avoiding taking action: People will complain to avoid trying to improve society and themselves. When someone says, "Everyone in my family is overweight" it excuses them from adopting a healthy lifestyle.

People also complain to avoid social embarrassment. A person who wants to ask someone to a dance may complain that the other person is "stuck on themselves" as a way of excusing themselves from asking and possibly being rejected.

To Brag: A complaint may be a cry of superiority. It implies that the complainer feels they don't have whatever fault they are complaining about. People will also complain about poor quality as a means of letting others know that they have high or refined standards. A person may complain about the food or service at a restaurant as a way of letting all who hear know that their disapproval of what's being presented proves they are arbiters of quality.

To Exercise Control: In "The Seat of the Soul," best-selling author Gary Zukav wrote, "complaining is a form of manipulation." People often complain as a means of inciting others to abandon an alliance and switch to their point of view. Complaining is used to build support and power by focusing on what is wrong with another's position. Complaining is used to lobby for a majority position of control.

Many people who are wearing the purple bracelets are also reading Eckhart Tolle’s latest book, A New Earth – Awakening to Your Life’s Purpose, or taking the on-line course hosted by Oprah. Tolle also speaks about complaining:

“Complaining is not to be confused with informing someone of a mistake or deficiency so that it can be put right. And to refrain from complaining doesn’t necessarily mean putting up with bad quality or behavior. There is no ego in telling the waiter that your soup is cold and needs to be heated up – if you stick to the facts, which are always neutral. How dare you serve me cold soup… that’s complaining. There is a me here that loves to feel personally offended by cold soup and is going to make the most of it, a me that enjoys making someone wrong.”

Another way of considering it – are you a complainer or an appreciator? Is your general viewpoint one of appreciation or judgment? Which viewpoint is more comfortable?

That purple bracelet – an idea whose time has come!
Posted by George Sewell at Friday, April 11, 2008