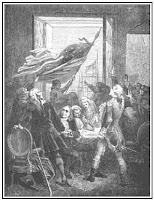 PunditGeorge has become an advocate. Seldom do I ardently promote a product, organization, candidate, or concept. This one is too important to languish in the House Ways and Means Committee. It’s time to free the Fair Tax and get it to the floor of the House for debate.

On January 4, 2007 H.R. 25 was introduced in the House of Representatives. The purpose of the bill is: “To promote freedom, fairness, and economic opportunity by repealing the income tax and other taxes, abolishing the Internal Revenue Service, and enacting a national sales tax to be administered primarily by the States.”

The Fair Tax, as it is called, can’t be discussed until you can grasp, comprehend, appreciate, or otherwise wrap your head around a reality of NO FEDERAL TAX on INCOME. Period. That’s not an easy concept since the income tax has been a part of the American experience since the 16th Amendment was ratified in 1913 - that's a century of conditioning to a tax policy. Companion legislation to the Fair Tax begins the process of repealing the 16th Amendment.

Your income. Her income. His income. Their income. Its income.
Income means income – the dollar value of your labor, talent, service, or product in the market. Therefore there are no federal taxes masquerading as payroll tax, capital gains, inheritance, alternative minimum tax, self-employment tax, unemployment tax – no federal taxation of income.

Now, consider how many taxes on income are currently embedded, hidden, in the price of everything. Imagine purchasing or selling any product or service without that hidden expense?

If you have some grasp of a Federal Income Tax-Free America, then the concept of a 23% inclusive sales tax on new goods and services is not a shocker. That 23% is what a host of experts calculate would maintain current federal income tax revenue. The research can be linked at www.fairtax.org.

The Fair Tax is a fair tax – it maintains current federal revenue and all programs, the whole enchilada. The Fair Tax does not reduce the federal budget, nor does it increase it, although a robust economy insures windfall Federal revenue.

April 15 remains, but its distinguishing feature is that it is the only day possible between April 14 and April 16. There is no form 1040, no income tax deductions, no tax shelters, no tax credits and so on. No withholding. If you want to know how much of your income is taken by the federal government, you need only look at the sales receipt of any purchase and there, clearly printed, is the 23% remitted to the Feds. Real time taxation. Don’t have to estimate a thing; don’t have to pre-pay a tax.

The sales tax is imposed on all retail sales for personal consumption of new goods and services. Intermediate business sales and exports are not taxed. Used goods or any savings, investments, or education tuition expenses are not taxed. There are NO exemptions under the Fair Tax. There are no special tax advantages to be gained by lobbying. Everyone pays the same rate.

The Fair Tax eliminates the ability of the government, through the IRS, to reward or punish citizens and business with the tax code. Taxpayer rights are incorporated into the act. The burden of proof of taxpayer non-compliance rests with the government – what a concept: Innocent until proven guilty. Taxpayers are entitled to professional fees in disputes unless the government establishes its position justified.

But what about the poor, the financially struggling? The Fair Tax is fair. Every American family is given a monthly “pre-bate” of the amount of federal sales tax on essential goods and services. Note the big difference between a pre-bate and a rebate. This amount is based on the federally defined poverty level. As calculated in H.R. 25, the federal poverty level for a family of four allows them to spend $27,380.00 TAX FREE each year. For the family of four that’s a prebate of $525.00 a month. This pre-bate is provided to all citizens with a valid social security number. You want a middle-class tax break? This is it. You want to assist those behind you? This is how.

Under the Fair Tax employees receive their entire paycheck and employers don’t have to hassle with withholding income taxes, social security, and other payroll taxes. Think for a moment the cost of compliance with current income tax laws and regulations. It’s boggling.

The Fair Tax is truly fair. Everyone who buys goods and services pays into the federal revenue. This includes illegal aliens, drug dealers, tourists, and even those clever folks who have spent a lot of time and money hiding their income to avoid taxation. There's no longer an incentive to hide, shift, export, or relocate income. Where’s the best place to invest capital, grow a business, research and develop new technology, and just plain work? The U.S.A.

The Fair Tax significantly enhances citizens and business in their pursuit of happiness. The export of “jobs” and capital away from the United States will diminish. Former Federal Reserve Chairman Allen Greenspan believes that billions of dollars in capital and jobs now overseas would return to the United States within months of implementation of the Fair Tax. That’s capital for business expansion, job creation, supply and demand and a 23% sales tax on consumption. If federal taxation is honestly about generating revenue, this is the way to do it.
But wait, someone says. What about my mortgage deduction? Deduction from what? There’s no tax on your income. There’s no need for a deduction. But wait! That’s 23% added on to the price of the home I plan to buy. Not if you’re buying an existing house – no tax. The Fair Tax does not double tax – federal taxes have already been collected. Even when buying a newly constructed house in the Fair Tax era the asking price will no longer include the hidden taxes currently included. No tax on the money saved for the down payment. No tax on the income used to purchase the house or pay the mortgage.

The Fair Tax has many opponents. I suspect most of them haven’t taken the time to actually look at the bill and compare the benefits of the Fair Tax compated to the current system. It appears to me that the Fair Tax benefits “We the People.”
Posted by George Sewell at Monday, October 20, 2008