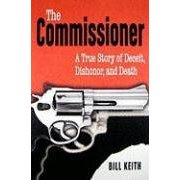 Something old, something hot off the press and something in between, it seems.
Hot off the press is journalist Bill Keith’s chronicle of political deceit, dishonor and murder - The Commissioner. This is the intriguing account of the final days of Shreveport, Louisiana’s long time Commissioner of Public Safety, George D’Artois in the 1970’s. I had just returned to Shreveport following grad school at the University of New Orleans when the Shreveport Times began investigations to irregularities in the City Department of Public Safety.
Keith, later a State Senator, was then a reporter for The Times and was on the edge of an enterprise team that probed into illegalities of the Commissioner’s office. Public Safety included the Fire and Police Departments and the untouchable Chief of Police, T.P. Kelley, who put everything on the line to alert the newspaper to serious abuses of office. The linchpin in the undoing of the once popular and powerful Commissioner (a George C. Scott look-alike if ever there were) was the refusal of Shreveport advertising executive Jim Leslie to accept a city check for payment for his services helping re-elect D’Artois in 1974. Leslie twice returned the check and that threw some light on how D’Artois manipulated funds for personal use and clandestine efforts. Jim Leslie was murdered in Baton Rouge July 9, 1976 following the legislature’s successful passage of the “right to work” law which Leslie was a highly visible consultant. Solving Leslie’s murder snaked around organized crime and labor until it focused on a hit allegedly ordered by D’Artois.

Being acquainted with many of the principles in the story adds flavor for this blogger of course, but I suspect readers will recognize that character counts and the greatest fear that tyranny has is to face honesty and integrity.

Honesty and integrity are consistent themes in Jim Powell’s The Triumph of Liberty - a 2,000 Year History, Told Through the Lives of Freedom’s Greatest Champions. I bought the book when it first appeared in 2000 and return to it from time to time. Like Daniel Boorstin’s classic,The Discoveres, Triumph gives succinct biographies of men and women thro

ugh time whose thinking as well as actions furthered the idea that human beings are created free - their natural state. Individual liberty, economic liberty, social freedom - all of which are antithesis of tyranny. History, in a sense, is a record of tyrants. Powell insures that the contributions of people overlooked, under-reported, or mis-represented by history are noted. I enjoy revisiting John Stuart Mill, Desiderius Erasmus, Thomas Jefferson, Victor Hugo, Martin Luther King and such luminares, but really enjoy learning how such folks as Louis L’Amour, William S. Gilbert, and Lysander Spooner helped sustain liberty. This would make a wonderful History 201 text book.

Joiner, a recognized authority on the Civil War, tells the incredible story of the Union Army’s attempt to isolate the western Confederacy and seize loot in the process. Major General Nathaniel P. Banks, a Massachusetts dandy with strong political connections, received the assignment - move up the Red River, seize the Louisiana Capital at Shreveport, and establish a presence in Texas. Rear Admiral David D. Porter would command a powerful armada of ships to accompany the army along the river.
In the post-Vicksburg and Gettysburg time, the Confederates were reeling and the Union sweep up the Red River should be a done deal. Unless, of course, mis-steps, mistakes, ignorance, and just plain stupidity lead to “one damn blunder from beginning end” as William T. Sherman described it. The expedition ultimately failed due to clever Confederate movements, a decision by Texans to fight in Louisiana rather than on their side of the Sabine River, and boggling maneuvers courtesy of Banks.

It’s a richly detailed military account and for folks in central and western Louisiana, it’s a geography “road trip” to places known and unknown.
Posted by George Sewell at Sunday, July 12, 2009