Doom, Gloom, and the Camel's Nose 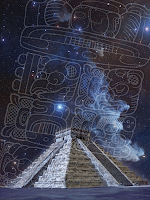 The November/December issue of Archaeology magazine features writer Anthony Aveni’s examination of the looming 2012 deadline. Deadline, that is, for something. This latest apocalypse derives from the conjunction of the Mayan Long Count (repeating calendar cycling every five thousand plus years) and the alignment of our Sun with the galactic plane, which occurs every 26,000 years. Hollywood’s hyping the cataclysmic potential and more than a few folk are: A - Hunkering down for the great disasters, or, B - preparing for the onset of global enlightenment. Although I’d prefer B, I rather suspect the value of 2012 is a re-affirmation of what Shakespeare noted some time ago in Julius Caesar:

Cassius: "The fault, dear Brutus, is not in our stars, but in ourselves, that we are underlings."

As the conspirators fashioned their murder of Julius Caesar, they understood that they determined their actions, not a celestial fate.

Now, physics is at work in our universe, and it’s not implausible that tugs of gravity, leaps of energized sub-atomic particles (waves), and galactic slips and slides could affect our Earth. It is certain that our North-South polarity has reversed in geologic time. That would certainly stir up the electromagnetic pot. On the other hand, we might finally get a handle on the unimaginable power that sustains the universe.

Purveyors of apocalypse want to use the fear of catastrophe to manipulate people into some desired behavior. Did someone say, “global warming?” Such doom and gloom doesn’t have to have a genuine basis, only the shared fear and expectation by as many people as possible. It’s a very old technique that works as well now as ever it did. 2012 offers another moment of scare.

Then again, I’m convinced there’s an accelerating spiritual awareness among mankind that is preparing a launch of human consciousness. Nothing new about this - this is the experience of the great Teachers and Prophets - their consciousness was vastly greater than their peers.
And, often their peers knew this and didn’t like it one bit. Sometimes the angry ones had to wait thousands of years to show their discontent, as did the Taliban with respect to the Buddha.

Perspective – you beast!
How dare you foil a simple mind
and confuse settled thinking
with an expanse of Life
without time.

The Camel’s Nose portion concerns the highly organized promotion of “volunteerism” going on. As I noted a couple of years ago, forced or coerced (say, guilt?) labor is anything but volunteering. Community service is now a valid punishment for certain legal offenders. Sadly, community service no longer retains the selfless aura it once had. Volunteering (volunteerism) is losing its luster as well. In the purest sense a person volunteers to do something because he/she believes it to be important and that he/she will feel good after rendering their time/service/wealth. It’s a personal experience.

Maybe the cosmic shifting around 2012 will nudge some of these unhappy folks to “give it up” forcing others to act in prescribed ways. It doesn’t work, never has, never will. Each person is inherently free - it’s hard wired. Maybe 2012 is a celestial highlight for the axiom what you resist, persists. Seems like I mused on that some time ago as well.
Posted by George Sewell at Tuesday, October 20, 2009