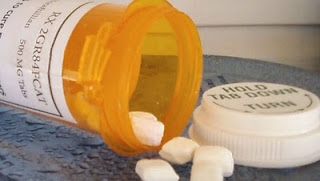 Sometimes I have to put on my Licensed Prevention Professional hat. This is one of those days. This morning began with about 4 inches of snow on the ground and a news story about an elementary school in Florida where “Two Florida teachers tried to "mellow out" their fourth grade students by passing out mint candies in pill bottles before a state test, and at least one caregiver is unhappy about it, saying the message that pills help relieve stress is inappropriate.”

Children are bombarded via television, radio, internet, and social messages that if you don’t feel good, take a pill. Pharmaceuticals are wonderful, but that’s not the issue here. The issue is that educated, trained, adult professionals and a publically funded institution would deliberately promote pill popping as a solution to a problem. It becomes “natural” to take a pill (legal or otherwise) when you “feel” anxious (or any other undesirable feeling.) It’s classical conditioning.

A challenge with any prevention strategy is to avoid turning information into unintended indoctrination. Providing information about drugs is not the same as keeping drug use/abuse in student’s faces. The more frequently students/people are exposed to “anti-drug” messages, the more drug abuse is imprinted in the mind. People who otherwise wouldn’t give using illicit drugs the time of day may become interested in the subject - and start paying attention to their peers who are using. Paying attention to something opens the door for more attention - and more attention cam beget activity.  Hesitations about taking "medicine" is diminished one more bit.  In this classroom, the "candy" medicine bottles have instructions on how to open the child-proof cap.

Diverting attention, through interest, is the sustainable manner of promulgating self efficacy - give attention to what is desired, rather than to what is undesired.  Alas, making students more interested in drugs is the unintended consequence in this instance.

Although not as painfully mis-guided as classroom anti-terror tactics I wrote about a few years ago, this bit of  classroom “creativity” demonstrates a professional and institutional proclivity for drug use by children (properly prescribed, of course.) Such presumptions concern many people.

I thought onsumer reporter John Stossel made an interesting point regarding school quality. How good are government run schools? Compared to what?  Nobody knows, because for most families there are no other options, nothing for comparison. There could be, and perhaps should be, a menu of school choice for families. A school that stocks “Watson’s Whiz Kid” pharmaceuticals might work wonders and attract students - by choice. An optional school might emphasize personal excellence and independence and either attract or repel students - by choice. I suspect the unhappy grandmother cited in this story would like to have such a choice.
Posted by George Sewell at Friday, February 12, 2010