It's Not Magic, It's The Way It Should Be

From time to time I pass along those moments that enrich daily life. Such as the other morning in Houston. Spouse and I were in Houston to take in MAGIC! at the Houston Museum of Natural Science. We favor a particular hotel convenient to the museum district and prime shopping areas. I decided to go to the lobby for an early morning coffee before packing to return home. I punched the elevator button and in a moment the door opened. As I was entering, I noticed a man down the leaving his room with much luggage. He walked directly to the elevator. “Perfect timing,” I said. 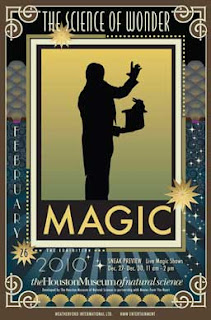 The door opened in the lobby and off he went to check out and I for coffee. Perfect timing. I’m certain that is the case for him. It’s the case for us as well. I noted the parking places in the packed lots that suddenly opened as we approached the night before. How smooth was the flow of traffic through the city both on arrival and upon leaving. That’s the way it should be.
Come to think of it, we get cranky when it isn’t. Which means that we know that it should.  We know that things should go right.  It's not magic when they do, it's the way it is.
Posted by George Sewell at Sunday, May 23, 2010