Okay, I realize that not everyone gets excited about a cotton-tail who hangs out in the yard.  You may remember when the tiny, yes, tiny Bunny appeared just before Easter this year, and was thus titled the official Easter Bunny. 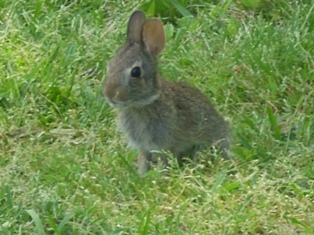 A precious little fellow who was very tolerant of us two legged mammals wandering around his domain.  In the ensuing months Bunny sightings continued, even as he munched on whatever it is that sprouts between some of the patio stones.  Surprisingly, he continued to make the Green House (the tool shed in the back yard) his hangout as he grew larger (relatively, of course.)

So, it was a delight, and a bit of a surprise, when we noticed yesterday the sudden appearance of his new, er, girl friend? 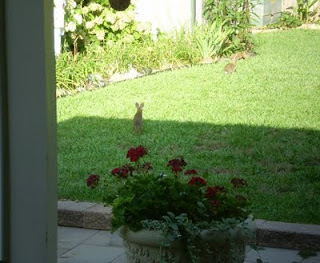 I managed to get a quick shot of them leaving the porch.  The Easter Bunny, near to the porch, is obviously delighted to have a new friend.