A Bridge, A Tavern, A Legacy. 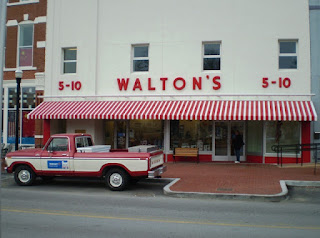 You know time’s zipping around when you walk into the first ever Walmart Super Store (Rogers, Arkansas) and note how “old” it seems.  We spent a couple of days recently in Northwest Arkansas (thanks to I-540, beginning in Ft. Smith, it’s a doable 6 ½ hours from Bossier City) to pay homage to Walmart and the simple but effective philosophy of Sam Walton.

The original Walton's 5 & 10 store in Bentonville is now the official Walmart Visitor’s Center and museum.  Artifact rich and telling an interesting story, the museum is U.S. of American to the core.  I mean, presidential museums often display the presidential vehicle.  In Bentonville you’ll find Sam’s Ford Truck on display (who needs a limousine to carry the dogs hunting?) 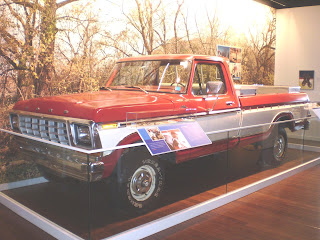 Not far from downtown is the reason for the journey – the just opened Crystal Bridges Museum of American Art.  The Walmart gift to America.   This is a world class display of art about American and art by Americans.  I was expecting to be impressed.  It was more like my one and only (and brief at that) visit to the Louvre – breathtaking.  The galleries bridge a central lake and move from Eighteenth century art to contemporary.  Being a history guy, the earliest works are my favorite.  Favorite in the sense that  the images that have illustrated so many history books, documentaries, and articles are now on the wall eighteen inches in front of me.  (There are no barriers, just a caution not to get closer than eighteen inches.  No gum chewing, either.) 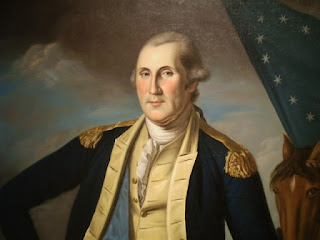 Upon entering Charles W. Peale’s portrait of Washington greets me.
Awesome.  But that’s a tease.  The works never cease - 400 plus over three centuries.
The atmosphere is relaxed, at ease, and curious.

This is only a sample.  There's three hundred years of art to explore.  A return trip is in order.  (Photos by the author do not do justice to the works!  But, sans flash, photographs are welcome.)
Since we were so close, half-a-day was set aside to learn more about the important Civil War battle at Pea Ridge near the Missouri border.  The March, 1862 fight was a near-run thing (as Wellington said, earlier) and the Union victory kept Missouri in the Union and much of Arkansas occupied.  The National Military Park is impressive – virtually the entire battle field is public land.  A seven mile road tours the pivotal points – the overlook of the field (bad news for exhausted confederates sheltering among the big rocks) and the Elkhorn Tavern (astride the telegraph road both sides wanted).
Well worth the trip.
Posted by George Sewell at Monday, February 20, 2012