What the British physicist Peter Higgs and several others showed is that if there exists an otherwise invisible background field permeating all of space, then the particles that convey some force like electromagnetism can interact with this field and effectively encounter resistance to their motion and slow down, like a swimmer moving through molasses.

So notes the New York Times when announcing the apparent discovery of the Higgs Boson, a.k.a. "The God Particle" July 10.  The discovery, at the Large Hadron Collider near Geneva, may explain why matter exists, according to Professor Higgs and others.  I'm particularly keen on the description "...invisible background field permeating all of space..."  Particles interacting with this field find varying levels of resistance, thus creating 3-D material.

The handle "God Particle" presumes that the effect of the Higgs Boson satisfies the need for a "Creator" or supreme intelligence to create the Universe.

This discovery of  an infinite background (it would have to be infinite to permeate all of space) that is able to manipulate energy (a.k.a. particles) sounds, to me, a lot like characteristics of the dreaded "C" word:  Consciousness.

That will be the next quandary in the realm of quantum physics- the selection and design of the assemblage of energy into matter.

For the moment, the ability to imagine such infinitesimal workings of our Universe is awesome.  It's boggling at times to wrap the head around the "weirdness" of  matter (which still comprises only 4 or 5% of all that is.)  This video does a great job of simplifying for us regular folks the incredible adventures the LHC physicists are engaged.


The Higgs Boson Explained from PHD Comics on Vimeo.

Exciting times to be alive! 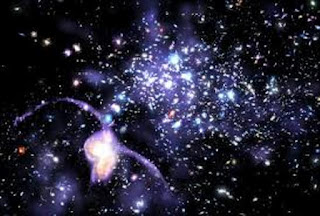