We hold these truths to be self-evident, that all men are created equal, that they are endowed by their Creator with certain unalienable Rights, that among these are Life, Liberty and the pursuit of Happiness. — That to secure these rights, Governments are instituted among Men, deriving their just powers from the consent of the governed, — That whenever any Form of Government becomes destructive of these ends, it is the Right of the People to alter or to abolish it, and to institute new Government… 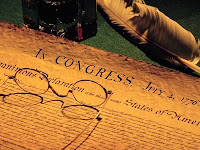 The truths, which Jefferson originally labeled “sacred” and Franklin edited to “self evident” are clearly presented: all men are created equal, that they are endowed by their Creator with certain unalienable Rights, that among these are Life, Liberty, and the pursuit of Happiness. Any discussion of governance follows this declaration of the inherent nature of mankind.

At the time the notion of unalienable Rights from a Creator was almost unheard of. Memory recalled only that rights, freedoms, property, and such, were granted by a Lord, King, Noble, government, etc. by authority of the "Divine Right of Kings." The Declaration was a political separation from the King of England and also a dramatic departure from the concept of “government.” As the Constitution clearly states: “We, the People…” Divine authority for governance henceforth comes directly from the people.  In 1787 the question was put to Benjamin Franklin following the close of the Congress:

“Well, Doctor, what have we got—a Republic or a Monarchy?”

“A Republic, if you can keep it.”
The sage knew from the get-go that the idea of the people retaining their authority to govern themselves would come under assault.  For over two hundred years “We the People” have managed, often barely, to keep the Republic.  The assaults never cease, however. 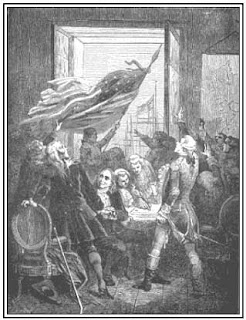 The same ilk of skeptics of the fledgling Republic live today.  Then, as now, busy-bodies and unhappy people use creative means to leach away the inherent freedom of another person.  Believing in the zero-sum - they can only be enhanced by another’s loss –  they gravitate towards machinations that limit, suppress, and outright steal individual Rights and Freedom.   There lies the mischief – who decides? Who decides the happiness of your pursuit?

Not too long ago a great treat of going to the movies was the incredibly tasty popcorn.  Well, that’s not good for you!  Popped in coconut oil, the popcorn was slowly killing you, at least according to those who know what is best for you.  Coconut oil was banned and other oils and flavorings were used for your healthier popcorn.  That’s been a while.

Guess what?  Coconut oil is good for you. 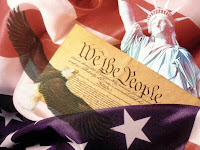 Freedom is lost by a thousand tiny cuts, any one of which is not fatal, but overall, in time, the “We, the people” loses it capitalization.  The ancient history of ruling elites deciding what the masses can and cannot have and do resumes.  In truth only the individual can know, and thus pursue, his/her Happiness. It is not a government function.

Words mean things. The authors of our celebrated Declaration of Independence didn’t toss words and language about carelessly or in search of catchy “read bites.” They penned a precise document which presented a profound premise for the individual person and his/her authority to construct and/or deconstruct government; to cast away any government that trespasses on the unalienable Rights.
Remember that several years ago millions of Americans went to bed one night, slept soundly, and woke up the next morning clinically obese. No long night of sleepwalking food binging - just an adjustment of Federal guidelines for body-fat ratios. Overnight millions of “fat” people were created – all needing some form of government help for their new condition (aka disease.)  And all they did was wake up the next morning.

Now we have a “war” against obesity.  Thousands of little cuts that have nothing, really, to do with overweight people (and who says that’s even wrong?)

Who decides? The Declaration of Independence is correct – you decide, from the self-evident truths which include your right to Life, Liberty, and the pursuit of Happiness. Make that Declaration every day.

(An update of a couple of posts from summers gone by.  Still makes sense to me!)