Just as there are only two emotions – good and bad – there are two ways of considering Universe.  The first considers all that is as matter; life and the universe are material and by manipulating the material, improvements can be made so the brain can interpret the five senses as good.  The second considers all that is as Conscious force using a meme of energy to create what is perceived as the material universe; thoughts are the creative energy that construct the three dimensional world the brain can interpret as good (or bad) from the senses.

As one wag put it, the first is an outside job, the latter an inside job.

Those who hold the materialistic construct have a belief that hard work, sweat, and a degree of suffering, is the only means of altering the material world for personal satisfaction (a good feeling.)  This approach has been taught for untold generations – no pain, no gain.  A classic example is JFK’s explanation of why the USA should go to the moon and return – “…because it’s hard…”  This belief observes obstacles to a desired goal (a range of good feelings) and, like boulders, the obstacles must be moved, crushed, or otherwise manipulated.  This is hard work.  An outside job.

Those who hold Consciousness as force have the belief that thinking (thought selection) is the creative energy that determines the construct of the perceived universe.  If the desire is to feel good, then thinking is directed (this is the consciousness element) to those similar energies and matter that the brain interprets, via senses, as good.  For many people engaged in that great adventure of lunar exploration, the whole thing was fun – that is, the feeling of satisfaction, exhilaration, achievement (all degrees of good) that resulted in physically getting to the moon and back.

Granted, the lunar example is flawed because of so many moving parts, but JFK did clearly state it would be done because it was hard, not easy.  On a daily level, the issue is to “do something” the hard way or the easy way.  Well, of course if one opts for the “easy way” then somehow he/she is cheating, or taking a short cut, or some other diversion from doing the “hard work” that is required to earn (be worthy) the desired goal.  At least that’s the way a materialistic thinker views it.

The distinguishing thoughts go something like this:  1) “I’ve got to make this happen,”  2) “What’s the best way to do this?”  The former grits teeth and puts the shoulder of thinking against the challenge/obstacle.  The latter relaxes and allows information to flow to reveal the solution.

Water doesn’t flow up hill.  That’s the hard route to the ocean.  Water lets gravity do the work and carry it to the desired result.  Hence the wisdom of “go with the flow!”

Since humans are materialistically mostly water, then why not consider the wisdom of water and  take the path of least resistance to the desire end? 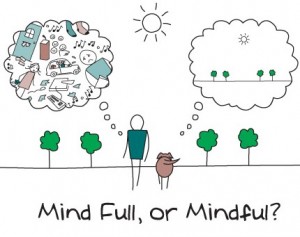 Heck, even the dog gets it…
Posted by George Sewell at Friday, September 28, 2012

Email ThisBlogThis!Share to TwitterShare to FacebookShare to Pinterest
Labels: acceptance, allowing, going with the flow, materialism