The Mischief of Drug Testing 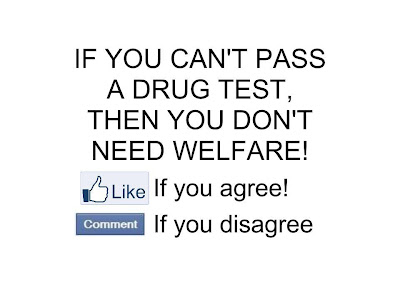 Similar images scurry around the internet, facebook, twitter and such, presumably to add pressure to require “drug testing” in order to receive “welfare” benefits.  Thoughts That Go Bump in the Night find this effort misguided.  It's a case of attempting to solve a "problem" with another, bigger, "problem."

Many, many, people who must endure a pre-employment drug screen and random screens from then on – for the privilege of working and earning a living - gaze upon the landscape and see a portion of their taxes (their earned compensation for their labor/talent confiscated by the government) given to people who seemingly do not work, or contribute to the public well-being.  At least, they think, those non-working (free-loading) people should have to prove themselves free of drugs to get their money.  The idea is to prevent abuse of “welfare” to buy drugs, by those who can’t/won’t/don’t work/support themselves.

What’s wrong with this picture?

It’s a class warfare manipulation to keep the employed (producers) focused on another population sub-group (those on “welfare”) rather than having the larger, more serious, issue show up on their radar - such as assaults on the Bill of Rights.  It’s a class-warfare divide and conquer strategy that has regrettable success.  The issue, as Thoughts sees it, is the drug testing itself.  Quick Poll:

Which of the following do you prefer?

1.  Welfare recipients must take and pass a monthly drug test prior to receiving benefits.

2.  No citizen of the United States shall be forced to take a drug test for purposes of employment, benefits, or other considerations.

Drug testing is a strategy from the “War on Drugs” which began in the 1970’s.  By any measure, that “war” is a hugely expensive exercise in futility that, because of the immense attention given, has actually increased “illicit” drug use and trafficking.  Drug-free workplaces are mandated by any business, government, organization, institution, or activity receiving federal funds.  Public schools are declared drug-free zones, thus, children are safe from exposure to drugs while at school.  Not.  As the saying goes, if you’re in over your head, stop shoveling.

Thoughts is not debating the right/wrong, good/bad regarding adult choices to use “drugs.”  These should be cultural norms, embedded in the beliefs and practices of people and not a decree from government. 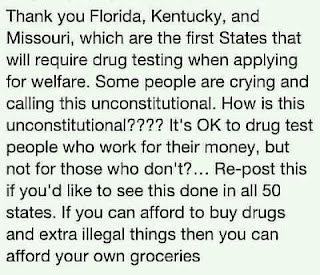 Grousing about the unfairness of drug testing empowers, through attention, the undesired situation.  What is wanted, I suspect, is extinction.  That, is, when operant behavior that has been previously reinforced no longer produces reinforcing consequences the behavior gradually stops occurring.  In other words, when attention is withdrawn, the objectionable behavior recedes.  Something like ignoring the tantrum of a two-year old.  But, it’s impossible to “not think about” something.  The solution is to think about something else.  In this case, shifting attention from “welfare and drug testing” to civil rights for citizens.  It is the drug testing that is objectionable to most people, and as misery loves company, if the “working folk” have to do it, then everyone should do it.  But, the reality is that “it” is unnecessary and a violation of civil rights.

End mandatory drug testing and there is no issue about welfare abuse - extinction.  Other issues may then surface which can lead to personal and social improvement.  But that’s a whole ‘nother blog.