A hard back, a paperback, and a kindle - good reading on them all.

The Savior Generals: How Five Great Commanders Saved Wars That Were Lost - From Ancient Greece to Iraq by Victor Davis Hanson 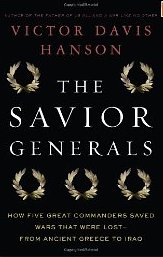 Visiting again the awesome scholarship and perspective of  Victor Davis Hanson.  The attraction this time is his take on five moments in history where a leader, stepping up or dropped into, a failing situation leads a dramatic turn-about with historical implications.  Specifically, Themistocles at Salamis, Flavius Belisarius in Byzantium, Sherman's capture of Atlanta and march to the sea, Matthew Ridgway's one-hundred days in Korea turning a rout into an enduring face-off, and David Petraeus and the Iraq surge.  Despite the epoch, there was much in common on the field and in the character of these pivotal leaders.


The Last Battle: When U.S. and German Soldiers Joined Forces in the Waning Hours of World War II in Europe  by Stephen Harding. 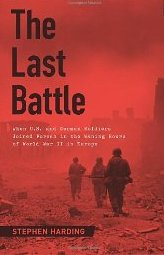 This is my introduction to historian and widely written Stephen Harding.  No one wanted to be the last man killed in WWII.  Sane minds on all sides didn't relish rogue Gestapo units murdering the last of Hitler's prisoners.  Thus a wild but true tale of how a rag-tag alliance sought to rescue notable French leaders and personages imprisoned in an Austrian fortress.  Harding introduces each player, setting up how he/she came to be in a certain place at a certain time, follows the rescue effort, and the fates of each following the war.  I especially enjoyed the general attitudes and perspectives of the French, Austrian, Germans, Americans and East Europeans.


Darkship Thieves by Sarah A. Hoyt. 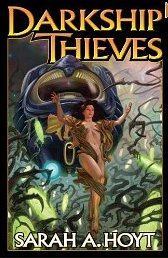 Reading this one now.  My foray into the science fiction realm of blogger Sarah Hoyt.   Curiously, although I've written what would be categorized science fiction, I generally don't read it (obviously I'm more of a history and non-fiction reader) but after bumping into references to her books time and time again while enjoying her editorials, I decided, well, why not?  Good move, George!  I'm having a rollicking good time with this way into the future tale of humans, mules (you'd have to read the book) and hide and seek.  Hoyt can hold a finicky attention like yours truly.

UPDATE:  Okay, confession:  Sarah held the attention and inspired me to get the sequel, Darkship Renegades, on my kindle.
Posted by George Sewell at Monday, May 27, 2013