Life is More Fun with Magic!

It's always fun to suffer from an illusion that causes a bit of head-knocking.  Such is magic.  Granted, what is known as magic is, properly, advanced technology or use of natural law, unknown to the observer.  Doing the "impossible" is always a treat.
For instance, my Grandfather managed to get a chair in a small bottle when he was a teenager. 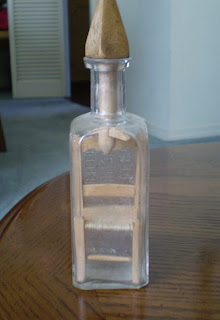 The chair was wood and fabric (seat) and the glass was a late 19th century medicine bottle.

In modern times, it's not a chair, but a cell phone, placed inside a bottle.  Not a glass medicine bottle, but a plastic water bottle.  Mischief by Yif - born in China, raised in France.  Messing with minds all over!  Enjoy a bit of magic on video.


Now, granted, there is opportunity for subtle video mischief and some suspect that with Yif, or use of CGI, or totally scripted event with stooges.  Who cares?  It's fun!

Email ThisBlogThis!Share to TwitterShare to FacebookShare to Pinterest
Labels: chair in a bottle, magic, Yif