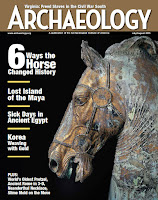 As a self-proclaimed Cognitive Philanthropist, how did I miss second century Greek philosophical philanthropist, Diogenes of Oinoanda?  Fortunately, I caught up with him while reading the current issue of Archaeology magazine.  The article is "In Search of a Philosopher's Stone" by Eric A. Powell.  It's a summary of a remarkable find in 1884 by two French epigraphers exploring the Turkish town of Oinoanda.  Scattered among the Greco-Roman ruins were inscriptions in stone, written by Diogenes of Oinoanda, an Epicurean who wished to share with the rank and file, his formula for living a successful and happy life.    As he wrote:  "The majority of people suffer from a common disease, as in a plague, with their false notions about things, and their number is increasing...I wished to use this stoa to advertise publically the (medicines) that bring salvation."  The "medicine" is Epicurean thought.

The inscriptions on the stoa were huge - 25,000 words designed to be ready by anyone and everyone.  What's curious is that there are no known contemporary references to Diogenes.  Certainly this unconventional gift to his fellow man was well known at the time.  Although a man of means and conscience, Diogenes didn't have to spend part of  his estate on the treatise.  He wanted to do it as a philanthropic service.

Diogenes knew that people were not disturbed by situations but by their thinking about the situation.  A version of  "a thing is neither good nor bad but thinking makes it so."  To improve one's life experience meant changing one's thinking.  Epicurus had explored a viable philosophy some four hundred years before.  In essence, happiness is the highest goal of life.  The pursuit of happiness is the purpose of life.  Happiness could be derived from an understanding of  how the Universe functioned, how nature was governed, and Man's place in the whole.  Then, as now, those that got it, got it.  Those that didn't, couldn't.  Diogenes at least wanted all to have access to such thinking.

Powell tags his article with an inscription:  "Not least for those who are called foreigners, for they are not foreigners, for, while the various segments of the Earth give difference people a different country, the whole compass of this world gives all people a single country, the entire Earth, and a single home, the world."

Fine fellow, this Diogenes of Oinoanda.

If you have the time, here's a translation of much of what Diogenes had inscribed: