This essay was written nearly a decade ago.  I could pen the same today.  Or, reprint the original.  It's a holiday, so I'll reprint.

We hold these truths to be self-evident, that all men are created equal, that they are endowed by their Creator with certain unalienable Rights, that among these are Life, Liberty and the pursuit of Happiness.  Declaration of Independence, 1776.

The questions were generally innocuous, such as “Why was Thomas Jefferson chosen to write the Declaration?” and “How many copies of the Declaration of Independence were made?”  However, lurking amidst the mundane was a bit of mischief:  “What do you think Jefferson meant by the term ‘pursuit of happiness’?”  And what did the historian “think” Jefferson meant?

“It meant the pursuit of a government that would bring happiness to the people; in other words, good governance.  It wasn’t happiness in terms of ‘I want a bigger SUV.’ ”  Yikes!  There is mischief afoot.

In the context of the Declaration, Jefferson et al are quite specific, as cited above.    The truths, which Jefferson originally considered “sacred” but Franklin changed to “self evident” (no need to debate something that is self-evident everywhere on Earth) are clearly presented:  all men are created equal, that they are endowed by their Creator with certain unalienable Rights, that among these are Life, Liberty, and the pursuit of Happiness.  Any discussion of governance follows this declaration of the inherent nature of mankind. 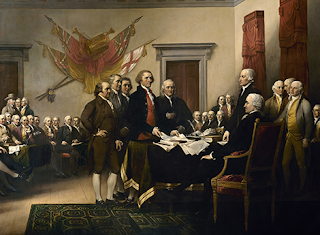 Granted, this was a dramatic statement.  At the time the notion of unalienable Rights from Creator was limited.  Memory recalled only that “rights,” “freedoms,” property, and such, are given to a person by a Lord, King, Noble, government, etc.  The Declaration was indeed a political separation from the King of England, and also a dramatic departure from the concept of “government.”  As the Constitution stated quite clearly:  “We, the People…”

Therefore I must disagree with the writer and cited Historian that the “pursuit of Happiness” meant creating a good government that would “bring happiness to the people.”  There lies the mischief – who decides?  Who decides your pursuit of Happiness?  Already you know that a “bigger SUV” is not in your future.  This is political correctness conditioning the thinking of the peasants.  Give me break – only the individual can know, and thus pursue, his/her Happiness.  It is not a government function.

Words do mean things.  The authors of our celebrated Declaration of Independence didn’t toss words and language about carelessly or in search of catchy “read bites.”  The penned a precise document which presented a profound premise for the individual person and his/her authority to construct and/or deconstruct government; to cast away any government that trespasses on the unalienable Rights.  Then, as now, “control freaks” use every means possible to leach away the inherent freedom of each person  - being zero-sum types, they believe they can only be enhanced by another’s loss – therefore they gravitate towards systems that limit, suppress, and outright eliminate individual Rights and Freedom.

To equate wanting a “bigger SUV” as the meaning of pursuit of Happiness is shallow, insulting, and a calculated phrase to diminish the Right of the individual to determine his/her Happiness and fate.  Whose business is it if someone believes they would be much happier if they drove a Hummer?  More power to the person!  It is not the province of “government” to decide what is “best” for you.  Government decides only what is best for it.  In modern times these dictates are couched in friendly terms of “for the children” or for the health of folks.  Lurking behind these positions and efforts is an undeniable erosion of your inherent, unalienable, Rights.

Who decides?  There are legions of busy-bodies working non-stop to come up with a formula for your good life.   If you are smart, you’ll sign on.  If you’re hesitant, or resistant, well, you’re taxed.  You want that car?  Okay, pay the tax.  You’ve got more rooms in your house than you need (which means someone is homeless because of your greed!) so pay a tax.  Stand by – how many old homes (150 + years) have no closets?  Easy enough to build – but if a closet is considered a “room” and subject to a tax, well, no closets!  We’ve been there, done that.  And here it comes again.

Always remember that several years ago millions of Americans went to bed one night, slept soundly, and woke up the next morning clinically obese.  No long night of sleepwalking binging, just an adjustment of Federal guidelines for body-fat ratios.  Overnight millions of “fat” people were created – all needing some form of government “help” for their new condition.

Who decides?  The Declaration of Independence is correct – you decide, from the self-evident truths which include your right to Life, Liberty, and the pursuit of Happiness.
Posted by George Sewell at Saturday, July 04, 2015