Just in time for Halloween

Netflix has released its Halloween surprise, Haunted, six true stories of the paranormal.  Episode 5 is the story of a Shreveport, Louisiana woman who experienced intermittent encounters with non-human entities from early childhood.  Several incidents are recreated including an abduction from her room while in college – notable since she dragged her fingers across the upside blades of the ceiling fan (streaks in the dust), which confirmed for her the next day that it wasn’t a dream or illusion. 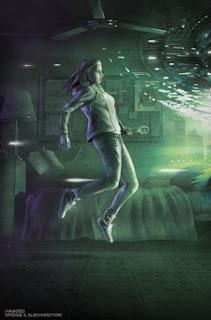 The format for the series is the individual telling his/her story to friends and family who are unaware of what’s been going on with him or her all these years.  The family and friends in the episodes did not know in advance about the story.  In Episode 5 yours truly not only was aware of Lindsey’s story, but had heard it at length prior to the production.  In the episode I am captioned as “UFO Investigator” and while accurate in general, it implies a degree of  expertise that isn’t quite true.  An investigator is out to prove something, one way or the other.  My interest in the phenomenon is not to prove anything, it is what it is, but to lend a confidential ear to persons who have had such experiences and cannot, or will not, talk to anyone about it – yet feel a need to do so.  Thus I look for commonalities in various accounts from different people, in different places, in different times.  Some of these commonalities are noted in the episode.

Shreveport made a good Washington, D.C. in the movie “Olympus is Down” (the White House set was constructed not far from my house.)  In Episode 5 Prague, Czech Republic, stands in for Shreveport.  The interviews were filmed in an 1880’s Victorian mansion not far from Pasadena, California (perfect for the creepy stories!)

The trailer for Haunted.