A man of peace
cannot bring harm
to another.
A man of liberty
cannot trample
the rights of another.
It is totally impossible
for such to happen.

I was confused about politics and government.
The Gnome set me straight.

We are vibrational Beings.  Our existence on a three dimensional Earth is governed by our five senses interpreting various frequencies.  This is most often illustrated with the visual spectrum, the range of energy vibrating captured by our eyes and sorted in our brain.  Same for touch (perception of texture determined by the frequency of the object), sound, smell, and taste.  The sum of these produce our current “moment” in time.  We also have the ability to sense, and for many, interpret, frequencies outside of the “normal” five.    The universe is a maelstrom of vibrating energy.  Much of it can’t be handled in the three dimension process – the range of vibration that, say, allows a cell in your body can be disrupted (harmed) when in contact with a wickedly fast wave/particle.  Thank you magnetic fields!  And hide behind that lead during the x-ray. 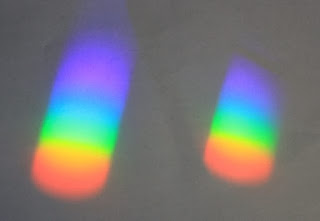 If our current time seems a bit confusing (especially for those who’ve been around for a while) it’s likely due to the mind-boggling array of electrical energy frequencies encountered every second.  The old analogy of a radio dial is still valid – don’t like the music/content of one channel (AM or FM or other) then move the dial to tune into a different frequency – channel.  Changing the channel doesn’t obliviate other frequencies/channels, they’re still there but you are no longer participating – tuned in – to them.  And there are a whole lot of channels!

Just as the proliferation of frequencies are zipping and zapping around, in and through you (cell phones, satellite transmissions of all manner, trains, planes, automobiles, Netflix, Prime – you could stay up all night listing the additional sources of transmissions!) so the volume of radiations from the galaxy and beyond are increasing.  The planet has entered a portion of the galaxy that is more robust.  There are new frequencies present; more familiar vibrations are receding.  It’s the ebb and flow of creation.  And it can be disturbing.

The human ability to create habits is a wonderful thing.  But there can be a downside.  To be very simple, imagine that Fred had a routine he established for starting his day.  Let’s say Fred set the alarm early enough to allow him sufficient time each morning to enjoy coffee, a bagel, while reading the newspaper delivered to his house near dawn.  Over the years that routine became a habit – Fred was no longer aware of the routine (which freed his mind to pursue all sorts of things each morning.”  But, when the newspaper ceased publication, and there was no longer a paper on his porch each morning, he was disturbed.  Because of the habit, he wasn’t aware of his disturbance based on not having a newspaper.

That discomfort is his clue that change is afoot.  In this case, Fred adjusted his morning routine to coffee, bagel, and a scan of trusted web sites.  After a while, no more discomfort.  Habits can be replaced (you don’t  break a habit – ouch!)

Now imagine the introduction of a multitude of “new” frequencies falling in, around, and through all aspects of  our three dimensional Earth experience.  Some people have the ability to recognize what is happening and adjust/adapt.  Great numbers, however, are clueless why they are feeling out of sorts, confused, agitated and so forth.  I suspect that it is particularly uncomfortable for those who cannot/will not grasp the vibrational nature of Life.

So, when observing what I call unhappy people, you are likely seeing someone very uncomfortable within his/her skin, so to speak, and has no idea why – other than to blame someone else, something else.  (Please don’t spend too much time giving your attention to unhappy people, your attention won’t do them any good and you’ll be calling out to creation to give me some more of this!)  Yeah, that Law of Attraction thing.

When in doubt about someone, something, use an age old tool to learn the truth:

15 “Beware of false prophets, who come to you in sheep’s clothing, but inwardly they are ravenous wolves. 16 You will know them by their fruits. Do men gather grapes from thornbushes or figs from thistles? 17 Even so, every good tree bears good fruit, but a bad tree bears bad fruit. 18 A good tree cannot bear bad fruit, nor can a bad tree bear good fruit.19 Every tree that does not bear good fruit is cut down and thrown into the fire. 20 Therefore by their fruits you will know them.

I find it sad that the “tools” provided us by the great teacher Jesus are often overlooked or rebuked.  They were not meant to be a religion, so to speak.  One does not have to be “religious” to benefit from such enlightened instruction.  Granted, a lot of folk are religious, and very happy with their belief, something unhappy people can’t get their head wrapped around.

What does a person, an institution, a political party, business, anything – PRODUCE?  The fruit matches the intent, despite the advertising, propaganda, meme...

In a time of great change, which we are experiencing, choose to recognize and enjoy others of similar frequency.  It’s natural.  There is no obligation otherwise.  As you adjust and change you become more aware of others doing the same.

Or, you could throw a fit, throw rocks, scream, curse, and rend because there ain’t no stinkin’ newspaper on the door step anymore.

Email ThisBlogThis!Share to TwitterShare to FacebookShare to Pinterest
Labels: by their fruit, Law of Attraction