(A tale from "Habits, Patterns, and Thoughts That Go Bump in the Night")

Dawn fed her cats, the primary ritual of her return to the apartment each evening. She enjoyed giving the cats her full attention when returning from another miserable day at the office. Whatever grief she endured making a living, there was solace at home. It would be nice, of course, to buy a townhouse where the cats could romp up stairs. So when she learned of an open position at another company, she applied.

Not that she expected to get it, but like her weekly purchase of the lottery ticket, one has to play in order to win. The problem was that the telephone rang.

“Is this Dawn?” asked the voice on the other end.

The cats scurried as she gasped in delight upon learning that the company wished to interview her for the new position. Accommodating, they scheduled the interview for Saturday morning.
This was Thursday, so time was short to prepare. A mental list of a hundred things to do raced across her mind. She kissed the cats goodbye and dashed to the Mall—a new outfit was in order for the interview.

Then came Friday. She counted the plants in her cubicle at work— how many would be permitted to make the move? She looked around at her co-workers—each equally miserable. There were no promotions to be had, of that she knew. Now she had an out, a prospect. The glances from others implied that they knew she might escape. And, they didn’t approve. Friday was a long day at the office. 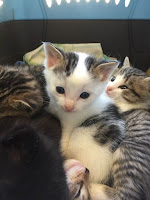 On the way home her car stalled. It wouldn’t start—at least not until the frantic fifth try.

The cats sniffed her rather than race to their food bowls. It wasn’t even dark, yet problems of perception were assembling in Dawn’s world.

Her new outfit, purchased for the interview, hung outside of her closet door—an icon to her hopes and dreams. She settled in bed, for the good night’s sleep. Yet the wardrobe loomed as her thoughts began to race around her anything-but-sleepy mind.

At midnight she calculated the cost of a full wardrobe. Further calculations projected the increase in salary with that cost—a good six months to recoup.
At one a.m. she had to buy a new car.

By two a.m. her co-workers knew of her interview and were insanely jealous. One was married to a policeman. Could he be enticed to stop her on the way to the interview?

At three a.m. she lost her vacation. She could at least count on two weeks vacation each year. It often made the difference in showing up for work. At the new job, she’d surely be at the bottom of the pole—at best a week off to live her life the way she wanted.

By four a.m. she had calculated the loss of taking the new job. The perceived costs and grief mounted with each minute. She would lose the pay increase for at least  year, just to pay off the new clothes she would have to have—and no vacation time to enjoy the benefits, which by now she was sure didn’t exist anyway.

At five a.m. it was time to sleep. But the alarm clock took care of that.

At six a.m. the hair dryer broke. The cats were wailing for a dawn feeding—usually they waited until seven.

Resentment gnawing in her stomach, Dawn left her apartment at eight a.m. for the drive to her nine a.m. interview. The fact that the city had overnight decided to tear up an important intersection was not lost on her as she turned into the parking lot.

A suspiciously pleasant receptionist ushered her into the interviewer’s office. The door closed as Dawn ruminated for a final moment on her agonies. The Interviewer entered the office and went to the coffee pot.

“Thank you for coming. Coffee?”

Dawn rose and glared at the wicked person in front of her. “I wouldn’t take this lousy job if you offered me twice as much!”

With that, she stormed out of the room, out of the building, and back into the crab bucket.*

Chances are, in your own way, you’ve pulled a Dawn—maybe several times. It’s called sabotage, also-known-as negative self-fulfilling prophecy. Your gut feeling said this or that, then somehow your actions made sure that whatever you feared, happened.

Perception = Reality in action. The interviewer may have been prepared to offer Dawn the job. The new job might have been the best place for her. But (an entire book will be written about “BUT...”), Dawn didn’t allow it to happen. Life may have presented her a good thing, but she couldn’t see it, and thus couldn’t take advantage of it. If you’re thinking “been there, done that,” then you’re more likely to think about how you feel and react to situations now than you did in the past. Nobody is doomed to continue making the same mistakes over and over and over.  But they certainly can.

* Another tale in Habits, Patterns, and Thoughts That Go Bump in the Night
Posted by George Sewell at Sunday, January 26, 2020