It’s the only month without a formal Holiday, and, August is H O T.  Many folks this time of year begin their annual longing for September when, you know, Autumn officially arrives.  The Equinox is a wonderful thing, but it doesn’t mean COOL, at least around here.  Cool doesn’t arrive until mid-October.

Years ago I took note of the general aberrant behavior of otherwise sane folk towards the latter part of summer.  The only variable was the unrelenting H O T, no Holidays, capricious and teasing rain, and more hot.  Therefore such odd behavior was christened “August,” as in “She’s got a case of August,” or, “He’ll survive, it’s a case of August.”  It does seem a coddiwomple, a nice term describing that you have no idea where you're going, but you sure as hell want to get out of August. 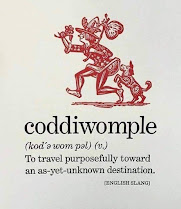 So, in order to assist in getting through August (especially August 2020), I hereby declare Sunday, August 23 to be universally recognized as THE Dog Day of August.  Appropriate celebrations may include brats, hotdogs, any number of sausages, and whatever cool refreshments are handy.  And, as a bonus, after The Dog Day, it’s only a hop and skip into Labor Day...which gives thought to Halloween...which gives thought to Thanksgiving...then Christmas, and, at last, the conclusion of 2020.

Email ThisBlogThis!Share to TwitterShare to FacebookShare to Pinterest
Labels: August