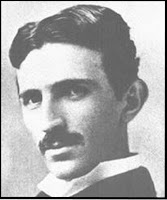 There was a moment on Labor Day when some folks and I were looking at several half-inch bolts rising from the slab of a building. A counter and just been removed (the place was being renovated) and the question was how best to remove the anchored bolts. My initial thinking was to saw them. Another fellow voted in favor of a hefty sledge hammer.

Later I picked up a hammer from one of the fellow’s tool box. Just for kicks I tapped one of the bolts. It made a nice “ding” sound and, curiously, I didn’t feel any reverberation. The hammer was one with a tuning fork in the handle which redirects the shock from the hammerer to the item hammered. So I basically let the hammer fall back on the bolt again and again from different angles. To my surprise the bolt fell out of the slab. The same fate awaited the other bolts.

I later thought about Nikola Tesla and his experiments with resonance as a destructive means. The image is of a glass shattering from sonic resonance. That may have been a big part of the relative ease by which the bolts were removed. Smashing with a sledge hammer would have damaged the slab as well. Sawing would be time consuming and would leave a bit of bolt rising above the slab. Perhaps it was the type of hammer I happened to use. In any case, the repeated “ding, ding” may have rattled the bolt loose.

A little less labor on Labor Day. That was something Tesla was all about.
Posted by George Sewell at Tuesday, September 02, 2008