I’m optimistic about the future. 2012 will be a remarkable year – the only possible year that could fall between 2011 and 2013. 2012, or any period, is what you make of it. At the moment a lot of people seem to be scaring themselves – fiscal nightmares, wars and rumors of wars, rampant diseases, rampant stupid people, and the list goes on. For those who can only think and see such, they will see and find it. But, it’s not for everyone. 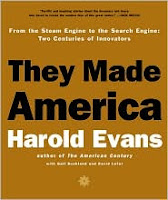 I’m celebrating this Labor Day by reading the companion book to the 2004 PBS series They Made America, Harold Evan’s masterful survey of principle innovators since the steam engine. Anyone who has any doubts about the character and resiliency of that remarkable assemblage of misfits and dreamers called “Americans” should read this immediately, or Netflix the DVD. Who knows how many people tinker with their dreams and visions in their garage or other thinking place? A snapshot of 2010 life in America presented to a citizen in 1840 would be alien. The general thought pattern of 1840 is far, far removed from that today. And it will be such in the future, which is why it’s always dangerous to declare that we’ve gone as far as we can go.

Who can imagine the “jobs” Americans will engage in the near future? Good grief, even a couple of decades ago the term “I.T. Engineer” would have brought curious looks. Mobility and freedom of movement seem to me to be the consistent theme and  new heights of both are in the works.

“Thoughts That Go Bump in the Night” reflects the thinking cause of grief for people. The reverse is also true, of course. It is the manner of one’s perspective in thought that determines the experience. For instance, the wonderful phrase a rising tide lifts all boats describes how an uplifting for some can benefit all. It’s a nice image and, I believe, is accurate. However, there will still be folks who refuse to participate will anchor their meager tubs to the muddy sea floor rather than float any higher. The limiting anchor is thought - not the world, not the actions of others, and not the environment.

Seasoned readers may recall the great Toilet Paper shortage of the 1970’s. Yes, it’s true – there was a shortage of toilet paper in America! Now that’s a horrible thought. Yet it was an illustration of self-fulfilling concepts. Johnny Carson made a joke about the nation running out of toilet paper. And then...

Much to the amazement of not only the show but of toilet paper factories across America, 20 million people that watched the Carson show that evening ran out in the morning and bought as much toilet paper as they could carry. By noon on December 20, 1973, practically every store in America was out of stock. Many of the stores tried to ration this valuable paper but they could not keep up with the demand no matter what they did.

There’s a truth in that; thought = belief = experience. There was no natural loss of toilet paper. No capricious demon snatched it away. The idea, planted by jovial Carson, was seized by viewers as fact and they reacted accordingly – creating a shortage that did not exist prior. Never underestimate the ability of anyone to create a shortage or misery (keeping that mental anchor on the sea floor.)

Fred was a man of great faith who knew that, despite whatever came his way, God would take care of him. One spring there were terrible rains and the town began to flood. The levee burst upstream and the police went around the town warning residents to evacuate at once. The policeman told Fred to get in his car and leave town— 15 feet of water was headed his way. Fred was polite and informed the officer that he trusted in God and that God would take care of him. The policeman left.

The waters began to rise and eventually Fred had to climb onto his roof. A boat from the Sheriff’s Department came around and the deputy instructed him to get in, that there was still time for him to escape. Fred informed the deputy that he trusted in God, and that God would take care of him. The boat left.

The waters continued to rise and Fred was perched atop his chimney to escape the snake infested water. The sun was setting as a helicopter from the National Guard flew overhead. A voice told him to grab the harness, and they would haul him to safety. Fred shouted back that he trusted God and that God would take care of him. The helicopter flew away.

The water continued to rise and Fred was about to be swept away. Fred became angry and cursed God. “Why have you forsaken me, Lord? I waited for you, and now I am about to drown!”

Suddenly, a Voice boomed from the Heavens: “What more do you want from me, Fred? I sent you a car, a boat, and a helicopter.”