Things That Dropped in the Night (and Day as well) 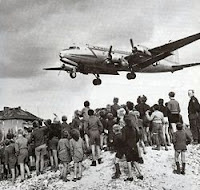 He wiggled his wings and risked court martial, yet the pilot of the C-47 was determined to drop candies to the starving children swarming over the rubble a few hundred feet below. For his efforts the youngsters dubbed him “Onkel Wackelflügel” or Uncle Wiggly Wings. It was a gesture by the conscientious Mormon, Gail Halvorsen, noticed around the world.

It was the Berlin Airlift – June 1948 thru May 1949. The United States, Great Britain, and France mobilized aircraft to ferry food, coal and supplies into West Berlin after Stalin closed access to the city. I recently visited the Truman Library in Missouri and reflected on the bold action. It was the “Cuban Missile Crisis” of its time.

The airlift began as a political maneuver in the expanding Cold War in Europe. Stalin didn’t want a prosperous West Berlin adjacent to his preferred weakened status of the conquered nations. His efforts to starve West Berliners (hence the allies) into submission was foiled by the logistical success of air cargo – and pilots like Halvorsen who understood the full humanitarian impact of the airlift.


Truman ordered it, the Military Governor of Germany General Lucius Clay carried it out, and Lt. General William Tunner forgave the young pilot for wiggling his wings at the children and encouraged such drops. They were called the Raisinbombers by the Germans. It was a political and humanitarian success. And a typical American response.
Halverson was the first Candy Bomber, but soon other crews joined in. Volunteers stateside were making the tiny parachutes for the bundles of candy and American candy makers were donating the goodies. Stalin never had a chance – a plane was landing at Templehof airport every 90 seconds and most were parachuting treats for the beleaguered kids.
The American spirit that carried out that unique effort is very much alive and appears to be awakening after slumbering for a generation. Another reason I am optimistic for the 21st Century.