Thoughts That Will Go Bump in the Night!

Expectations:
Thoughts That Will Go Bump in the Night

You might not always get what you want, but you invariably get what you expect. When habits of thinking meld with the habits of feeling over time, expectations are created. This can be positive. It can be otherwise.

Expectations are very powerful. Much of your daily experience is influenced by your expectations. For instance, someone might desire to win the lottery. That’s rational. An irrational expectation is when a person believes that winning the lottery is the only way for his life to improve.

Maybe you know someone who wakes up in the morning and mentally decrees, “this day will be positive, full of energy and opportunity.” But, if in the back of the mind or gut (the two residences of expectation) the person decrees, “but it’s not really going to happen,” which decree will triumph? Gut level negative expectations are like tiny demon parrots whispering into the subconscious.

The converse is also true. Sally might know that a challenging day looms before her—such as the big test. Yet from the back of her mind or the pit of her stomach comes the quiet expectation that she will handle successfully whatever comes her way. Nine troubles are probably going to vanish by lunch.

Expectation is a variation of “is the glass half full or half empty?” Like habits and patterns, expectations are often unconscious. If the expectation is narrow, limited, and negative, then it is reasonable that the ensuing experience will be less than desired.

There was a humorous story circulating in Europe at the end of the Communist regime in Russia that captured the essence of expectation. It went something like this (with apologies to 21st century Russians):

A Russian, an Englishman, and a Frenchman were walking along the road one day when they spotted a muddy lamp lying in the ditch. The Englishman picked it up and the Frenchman cleaned it. Suddenly, a Genie appeared in a puff of smoke. Greatly relieved to be free of her tiny prison, Genie offered to grant each of her liberators one wish.

The Englishman thought for a moment. “Genie, I wish that I owned a great estate with a full staff to wait on me and my family.” Poof! It was done.

Somehow, in some curious way, the Russian holds the belief that wrecking the neighbor’s car will somehow improve his own life. That may not make sense to you, but it does to him.

The poor fellow has developed a habit of thinking in terms of what others have that he doesn’t. He is accustomed to feeling that somehow, someway, he is cheated when other people prosper. He expects conflict. That’s the way he has conditioned himself, through his habits, to react to people and situations around him.

The problem, of course, is that he is face-to-face with a moment, the Genie, that could in an instant transform his life. Yet what does he ask for? What does he seek? What does he expect? Why should his neighbor be so lucky in life as to have a new car? Why should he have such bad luck? Wreck the neighbor’s car! In some magical way this will make his life better. Not.

A useful definition of “luck” is when preparation meets opportunity. Or, conversely, when silent negative expectations meet circumstance.

Take for example, Ralph’s curious love life. Ralph truly wants and desires to have a loving relationship with a wonderful woman. Since we are familiar with the patterns he has created in his life, it is possible to draw a picture of his love life.

Ralph walks into a room with 99 women and Roberta. He is attracted to her. “This is it,” he thinks. They get along beautifully— she’s into baking cakes without eggs and he makes pork purses. This is heaven! He’s delighted. She’s delighted. They have great plans.

Ralph walks into a room with 98 women and Monica. He is attracted to her. They hit it off. Now, Ralph is much wiser and works harder to make the relationship succeed. He learned his lesson. Things are great! Monica’s the one! Hooray!

Ralph walks into a room with 97 women and Wanda. He is attracted to Wanda. He is really careful now and is the perfect gentleman and friend. They make a marvelous couple. Finally, romance has arrived!

Crash. Burn.
Look familiar? The ups and downs of Ralph’s love life are a definite pattern. But what is going on here? Remember that he truly, passionately, desires a wonderful relationship. He no doubt invests a great deal of energy to make it happen. But something is clearly awry. Let’s look at Ralph’s pattern.

A room full of women and he gravitates to Roberta, Monica and Wanda. Why? Birds of a feather really do flock together. Like does attract like. It is human nature to associate with others of similar thinking, experience, or expectation. Ralph chooses Roberta and she him. He probably supports her attempts to bake an egg-free coconut cake, and she believes that he can turn a pig’s ear into silk.

On the upside, things go great. The relationship then descends and craters. What could cause this to happen over and over? Expectation. Ralph got what he expected, not what he wanted.

Unconsciously, Ralph may not expect the relationship (any relationship) to last. The demon parrot whispers from his gut, “it won’t last, it won’t work.” The dilemma for Ralph is when the relationships do work. He has a lot of experience with bad relationships and little with good ones. He feels more and more uncomfortable and he doesn’t know why - like Monique and her supportive husband.

Regardless of the women, there’s absolutely nothing threatening Ralph anywhere. Still, he becomes more uncomfortable. Finally, he has no alternative but to sabotage the relationship. Unconsciously, he forces it to an end. Curiously, he feels a strange sense of relief.

He has fulfilled what he expected, even though it was not what he desired. 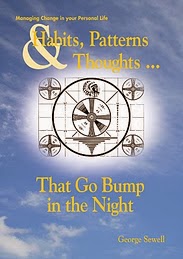 People seem to seek the familiar when confronted with change or an unknown. Because we are creatures of habit - and habits by definition are predictable—we are very uncomfortable with the unknown. We don’t know what’s out there. We can’t predict the outcome. This unease (fear) coupled with habits and patterns can override desire. This was a factor in Dawn’s sabotage of the interview. It was easier for her to endure the current position than adjust to the new job. She has worked for several Bentleys and knows the situation. She might not like it, but it is a known environment. It is, in a sense, the Devil she knows.

Email ThisBlogThis!Share to TwitterShare to FacebookShare to Pinterest
Labels: cause and effect, expectation, Habits & Patterns, Law of Attraction

George Sewell
George Sewell studied the nature and process of personal change for thirty years as a counselor, manager, and administrator in the field of addictive disorders including problem gambling. He is a playwright, author, and teacher. He has advanced degrees in Drama & Communications and Counseling and is a Licensed Prevention Professional and Internationally Certified Prevention Specialist. He was awarded the Louisiana Division of the Arts Fellowship in Theatre (Playwriting.) His books include "The Krismere," "Habits, Patterns, and Thoughts That Go Bump in the Night," "Just the FAQ's, Please, About Alcohol and Drug Abuse" (co-author Dan Baldwin) and "A Gnome, A Candle, And Me" (illustrated by Chester Delacruz.) George lives in Bossier City, Louisiana.