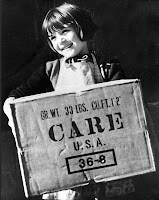 It’s axiomatic that how one feels is determined by how one thinks. When attention is given to something aggravating, then there is a disruptive feeling. Confusion begins when attempts are made to change the aggravating thing/person in order to have a better feeling. The most effective way to get rid of an aggravating situation/person is focus on something better.

I happened upon the May 2001 issue of Smithsonian and found something that shifted my focus from aggravation with current political thinking. In that issue, printed in those innocent times pre-911, was a story by Carolyn Crowley about CARE – those fabulous boxes from Americans in the 1946 food relief program. Crowley cites a German Army Chaplain POW in a French hospital who received the twenty-two pound CARE package.

The German was naturally wary of this “gift” from the recent enemy, the United States. What’s the catch, or the snag, he wondered when considering the bounty of food. Never getting enough to eat was the norm for the Chaplain, and even that consisted of cabbage soup, tea, bread and perhaps some cheese. A stark contrast to the corned beef, bacon, liver load, chocolates, egg powder, coffee, flour and such in the CARE package. For three days the German pondered the gift.

Finally, the German Army Chaplain concluded, “Americans are different. They help people in need, regardless of who and where they are.”

True then, true now. No apologies necessary. That’s what we do.
Posted by George Sewell at Friday, July 25, 2008